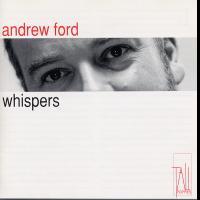 It is often the case with a collaborative work, such as Whispers, that ideas come from a number of sources. Indeed it is sometimes difficult to recall who had which idea. It was certainly Gerald English’s suggestion that I should write him this piece. I spent a number of months wondering about the subject, the raison d’être for the music. Finally I decided on a conductor rehearsing an orchestra. This is hardly a new idea: there is, after all, Fellini’s Orchestra Rehearsal; there are many pieces by Berio (Recital I and Melodrama to name two) which deal with the persona of the performer.

In order to follow a conductor on some kind of personal odyssey, it is as well to begin with something familiar: the orchestra must be heard to be rehearsing a well-known piece of music. The Seymour Group’s artistic director, Tony Fogg, suggested Mahler and I immediately plumped for the composer’s fourth symphony. This was partly because the texture of the music is consistently lighter than that of the other symphonies, partly because there is a text (which gives the conductor a reason to sing) and partly because I had always wanted to write for sleigh bells. When Rodney Hall became involved in the project, he suggested that we restrict ourselves to the final (vocal) movement, which in any case quotes from the first movement. (There is, however, also a brief reference to the solo violin’s Dance of Death from the second movement.)

The music of Whispers proceeds from Mahler’s symphony and practically everything which occurs can be traced back to the it. The instruments extend their repertoire of musical gestures, but largely retain their Mahlerian roles: the double bass, for instance, plays nothing that Mahler himself might not have written for that instrument on a particularly extrovert day; the percussion requirements (with the exception of a single tubular bell) are actually more modest than Mahler’s own.

Whispers was commissioned by the Seymour Group with financial assistance from the Performing Arts and Literature Boards of the Australia Council. It is dedicated to Gerald English, from two of his biggest fans, on the occasion of his sixty-fifth birthday. Whispers was first performed by English and the Seymour Group in Sydney in August 1990. The production was by Barrie Kosky.